Last Saturday, I tried to get into China by crossing the Tian Shan Mountains by bus.

Every day, a Chinese sleeper bus goes from Almaty to Urumqi. I had never seen these kind of buses before. People lie down in two rows of bunk beds, which is probably not an uncomfortable way to travel, if you are smaller than 1m70. 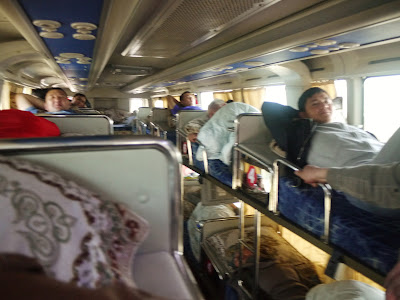 As I felt a bit squeezed in, however, I soon went ahead and sat down next to the driver. Dima, a Russian trader, was also there, and had many stories to tell: 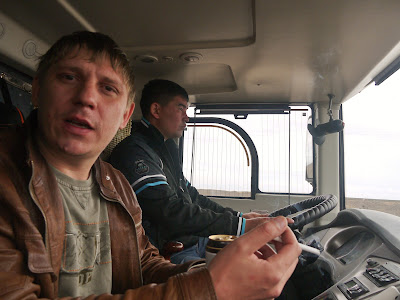 Although this is one of the main highways linking Kazakhstan and China, is was actually more like a small country road, being rather bumpy at places. 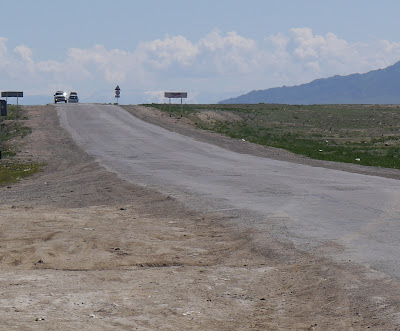 As we were bumping along, all of a sudden a tiny but very fat policeman emerged out from the shadows of a poplar tree and stopped our bus (seeing the policeman, Dima released an impressive flow of Russian swearwords). The policeman checked all our passports, and found that on my migration card, a stamp was missing. As I had been in Kazakhstan for more than 5 days, I should have requested a registration stamp from a police station somewhere, which I didn't know (but which I should have known, as on the backside of the small migration card all this is explained in detail). "The lack of this stamp is a problem", said the policeman, "how should we proceed?". The bus-driver made signs behind the policeman's back that this was the moment to pass over the bribe, which I clumsily did. Shortly afterwards, we were on the road again.

Then we stopped at a small shop for lunch. As my last tenge had already left me shortly before, Dima (who was concerned about the Greek debt crisis and emphasised many times that it will all end very badly, see picture below) invited me to a beer and pirogi. 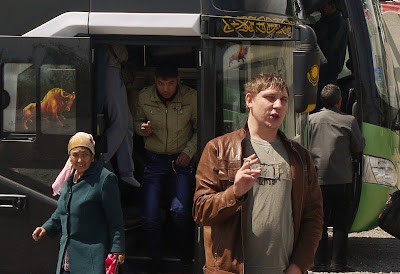 Back on the road, we soon reached a military check-point near the Kazakh-Chinese border. It was a desolate place with a barrier, two soldiers, a donkey, and lots of dust. Again, one of the soldiers noticed my missing registration. He phoned his superior, asking how to proceed, and was told that this is a serious matter, and that I should go back to the town of Zharkent (about 40 km into the other direction) to get the missing stamp. Apparently, the superior also knew a taxi-driver, who arrived shortly afterwards, and who was happy to bring me back to Zharkent.

The taxi-driver was an optimist. "If we only drive fast enough, we can get the stamp, and catch the bus before it crosses into China", he said, while crashing his gears into position and pushing the accelerator of his ancient car to the floor. Soon we were racing back along the China-Kazakhstan highway, leaving a cloud of dust behind.

However, the stamp-issuing office in Zharkent offered a sad surprise. As it was Saturday afternoon, the office had already closed, not to open until Monday morning. 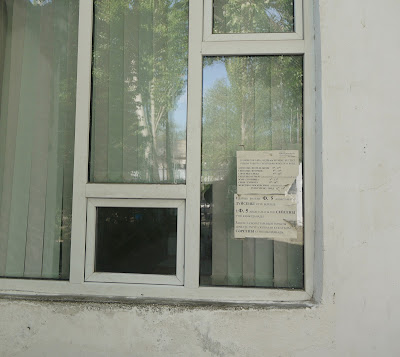 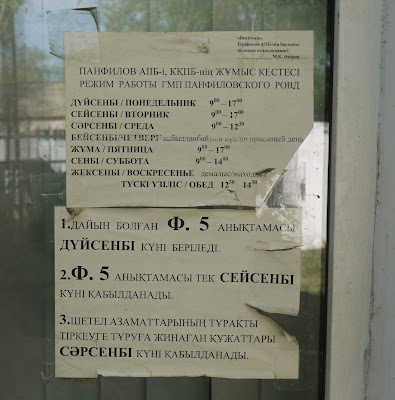 So we tried the nearby police-station. 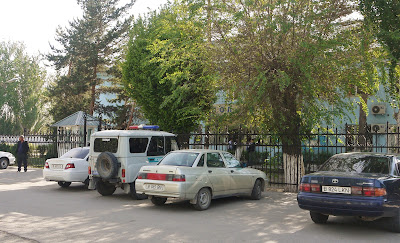 But there a sad and very uninterested looking policeman had even worse news. He gravely declaimed that this special and very important stamp can anyways only be obtained in important places, such as the Kazakh capital Astana, or maybe in Almaty.

As the next bus to Almaty was leaving only the next morning, I rented a room in Hotel Asia, took my camera, and started exploring the place. 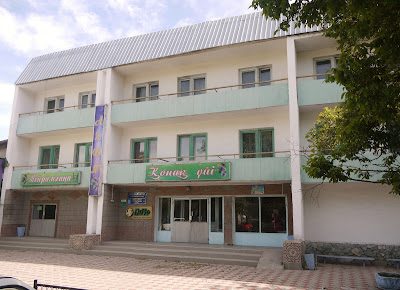 Just around the corner was a small bazar. It smelled and sounded all very much like Central Asia: 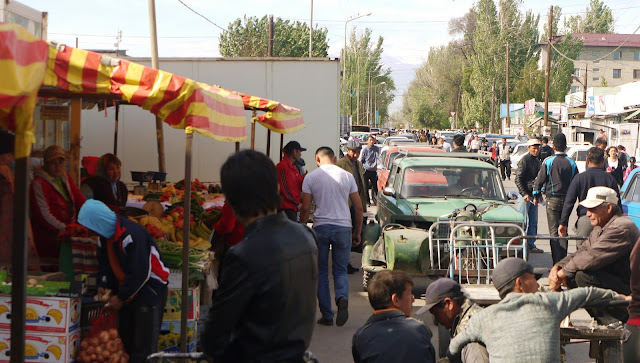 A couple of market-women asked me to take their pictures: 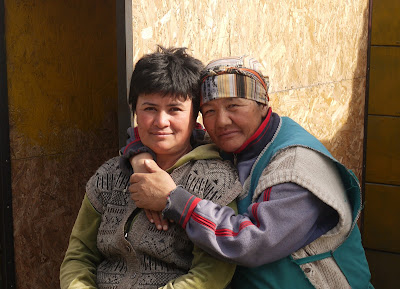 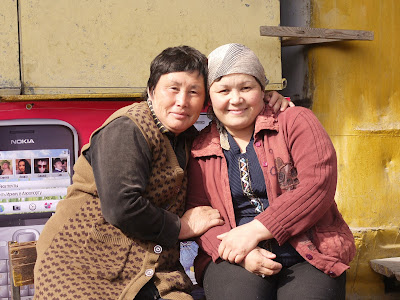 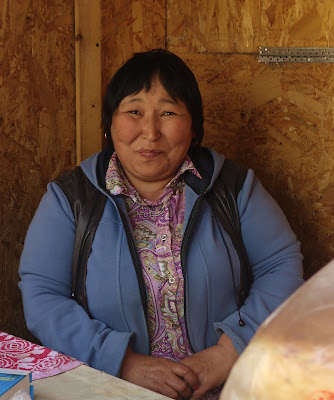 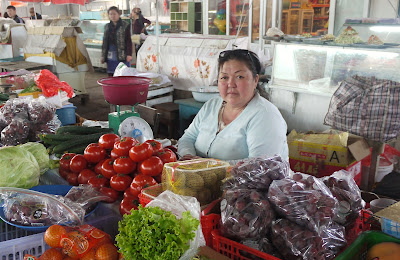 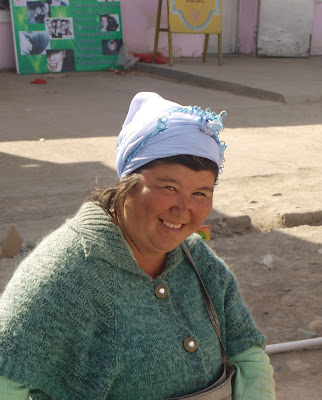 Then I bought some very tasty goat cheese from this happy old lady: 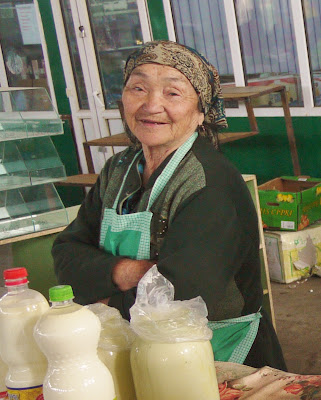 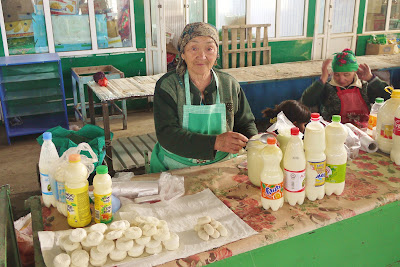 As it was still fairly early in the afternoon, I bought a bottle of water, and set out walking towards the mountains.

The roads were dusty, and compared to Yekaterinburg two weeks earlier, the sun was already very warm. 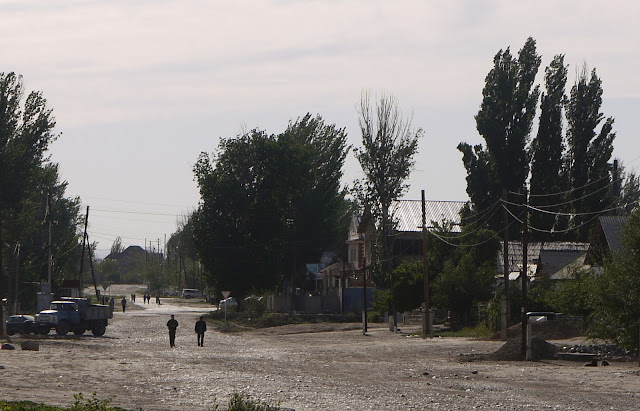 Soon, I came across a couple of dudes who were repairing their UAZik. When I told them that this is exactly the car I plan to buy if I'll ever manage to make some money (see this previous post), they for whatever reason couldn't stop laughing. 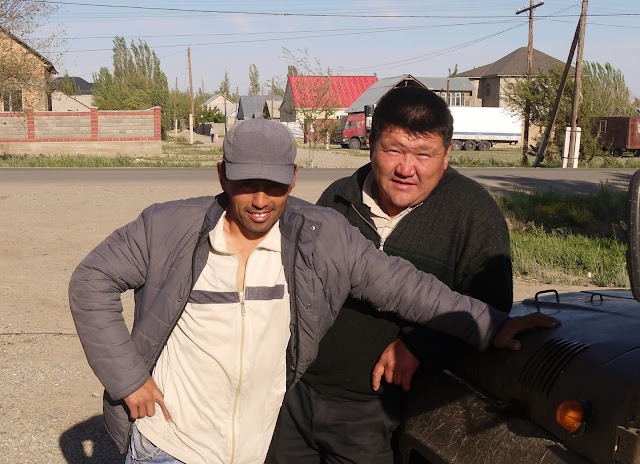 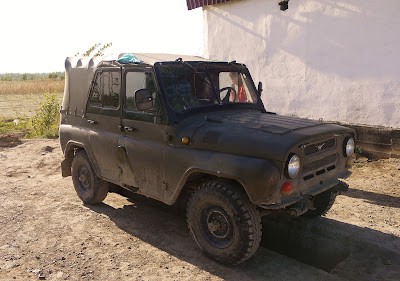 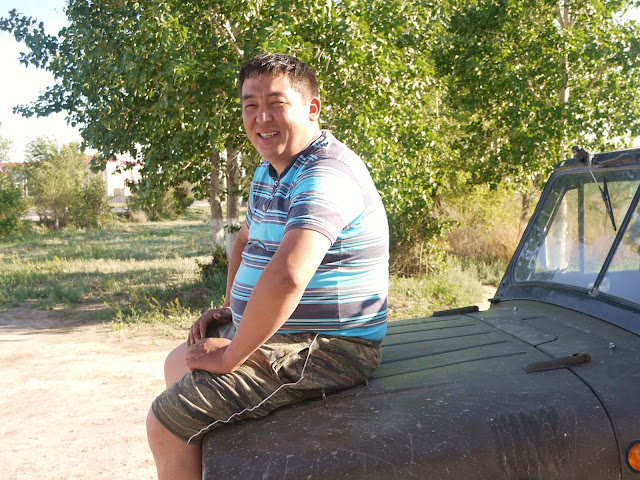 Around the corner, I found another nice UAZik - almost new, just lacking a bit of fresh paint: 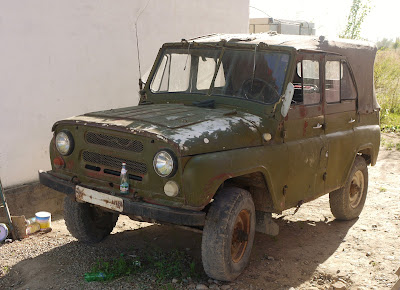 Then I continued walking through the fields. 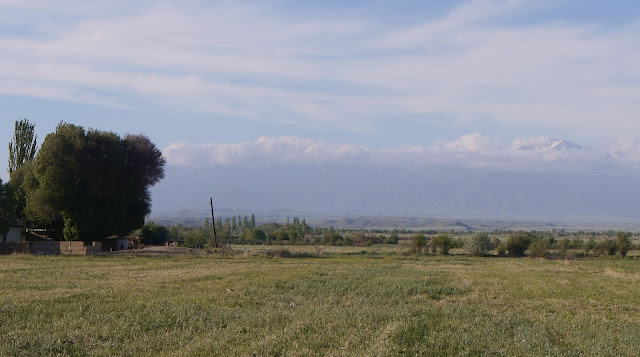 When it was already getting darker and I was on my way back, I passed by a farm where some people were baking bread. 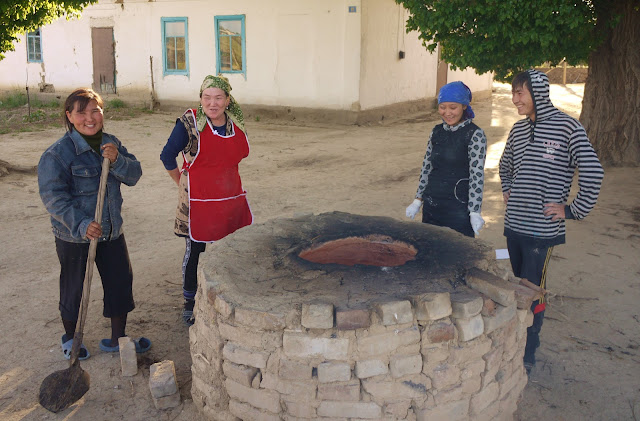 The next morning, I woke up early, with the sun shining into the room. The air outside was nice and fresh. Walking a bit around town, I found a beautiful mosque, and sat down in front of the big green gate. A donkey cart was passing by. Slowly the town was waking up. 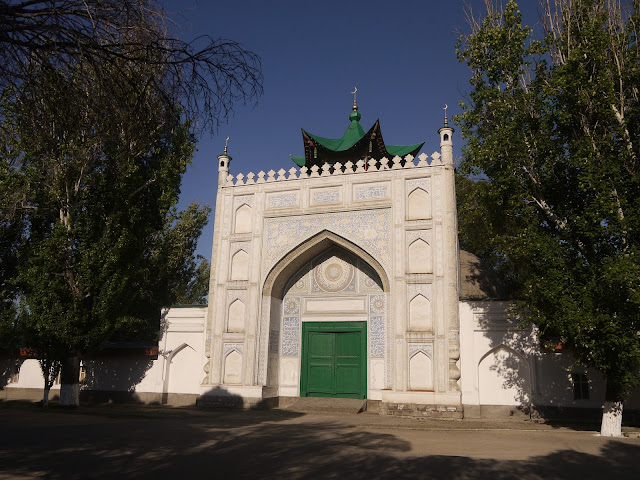 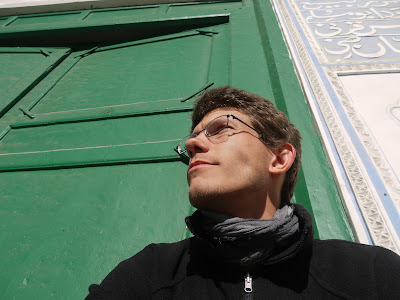 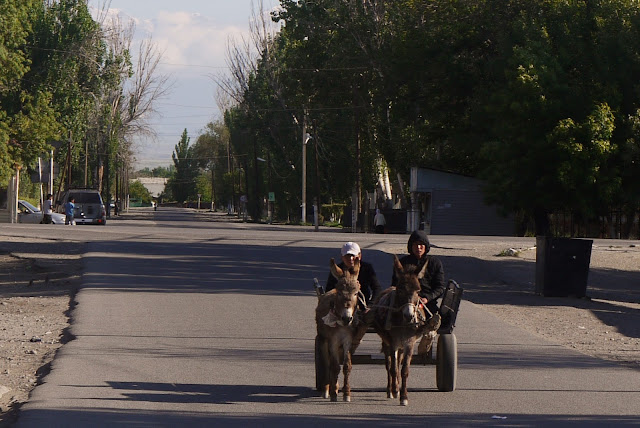 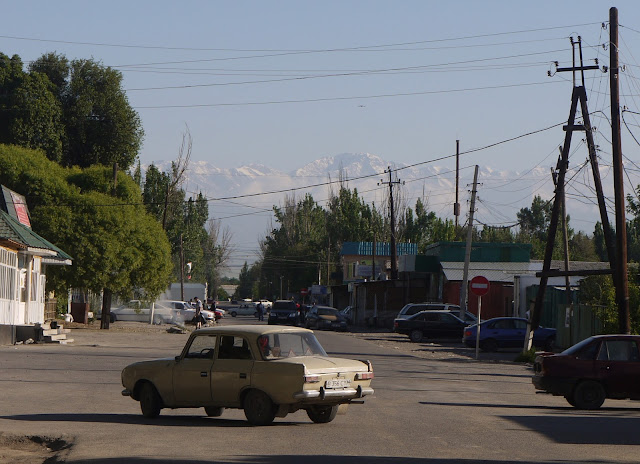 Finally, it was time to go to the bus station, where the bus to Almaty was already waiting. 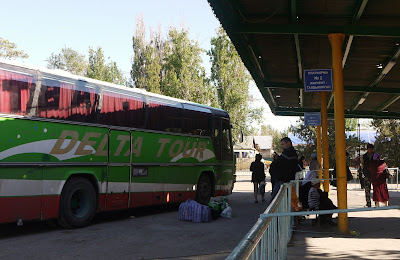 Back in Almaty, this morning I went to the migration police to get my stamp. There was a fine to pay as I was registering late, but otherwise people were very friendly and competent, and after 10 minutes, I had my stamp. So tomorrow, I'll try again to cross the Tian Shan mountains into China. 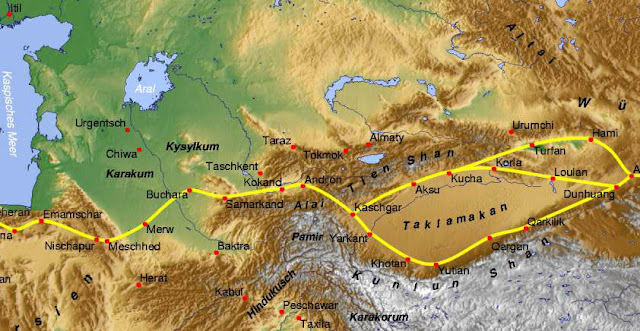 Posted by Michael Rochlitz at 19:07