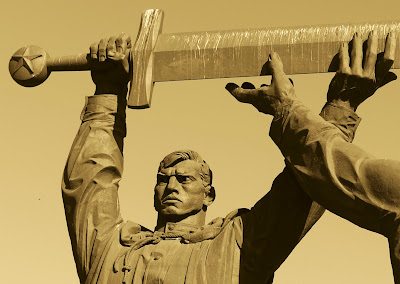 At about 5am in late September 2010, I stumbled out of my cold room in the hotel Yuzhny Ural in Chelyabinsk, to get on the first bus to Magnitogorsk. The journey takes about five hours, and after two hours on the road it was slowly getting light. We were driving through the southern Russian steppe, past an enormous coal-fired power station, some churches with golden cupolas, and a group of riders guarding a flock of what looked like wild horses. Around 9, the bus stopped at a small service station, and we had a coffee. On an iron fence nearby, somebody had written: 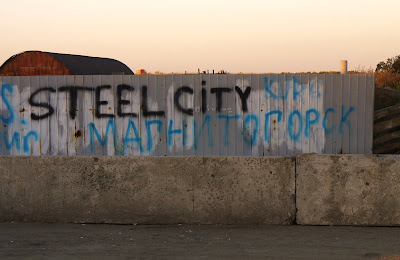 That was where we were going.

Soon afterwards, the sky became somehow darker, although there were no clouds. Then all of a sudden the bus passed between two hills, and there it lay, like a huge living beast: 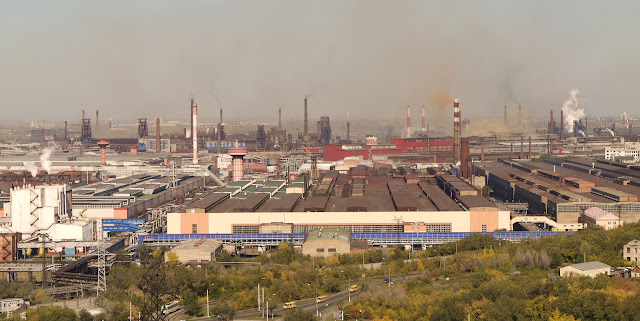 The steel factory was build in the early 1930s, as part of Stalin's industrialization
drive that aimed to provide the Soviet Union with heavy industry beyond the reach
of  the country's potential enemies. Princeton historian Stephen Kotkin has written
a book about the construction of the factory and its sourrounding city, a true
masterpiece.


There is also a Soviet movie about the factory's construction, Время, Вперед! (Time, Forward!), from 1965. The soundtrack by Georgy Sviridov is brilliant, so much so that until 1991 it was used as the opening theme for the main evening news on Soviet television.

A second, less known film about the building of Magnitka is the documentary Song of Heroes (1932) by the Dutch filmmaker Joris Ivens. Unlike in Время, Вперед!, here much of the footage is original, which makes the documentary most interesting to watch.

During the first years, a number of foreign volunteers and specialists participated in the construction of the steelworks. One of them was the American John Scott, whose book Behind the Urals: An American Worker in Russia's City of Steel makes you feel as if you had been there yourself. 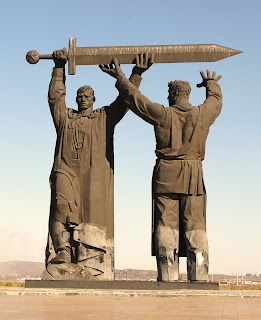 Despite countless difficulties, the factory was build in record time, and played a crucial part in the Soviet defence effort during WW II. Facing the factory, a huge monument commemorates this contribution, depicting a steelworker handing a sword to a soldier:

However, in later years Magnitka faced increasing difficulties due to lacking modernization, inefficient production and environmental pollution, so that by the late 1980s, the future for the factory and its workers looked bleak (as documented in another brilliant study by Kotkin).

When I was there in 2010, I was thus surprised to learn that the Magnitogorsk Iron and Steel Works (MMK) were again economically very successful. To my knowledge, there is no study investigating how the factory managed to become one of the world's most successful and competitive exporters of steel in the short time period since Kotkin's last study, although this question is hugely interesting. If somebody has some spare funding for two years, I would be more than happy to investigate this more closely.

After having spent a day walking round the factory and the sourrounding hills, I went back to the bus station in the late afternoon. The town of Magnitogorsk lies on the other side of a lake, opposite the steelworks, and was very peaceful after the drumming and banging of the factory, with the sun blinking through autumn leaves: 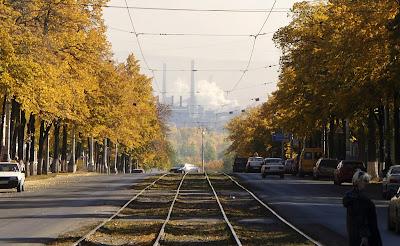 Near to the station was another monument of a steelworker, which you can see at the beginning of this beautiful shortfilm by Shasha Aleksandrov (the film is edited in precise correspondence with technical operations in sheet metal manufacturing at MMK):