Recently, I read a big new biography of Deng Xiaoping, the man who put China on the path towards economic reform in the late 1970s (see here a more detailed review that I wrote for Europe-Asia Studies).

The book by Harvard professor Ezra Vogel was a bit lengthy in places, with a lot of detailed information on political machinations in post-Mao China.

But Vogel does a good job in showing how Deng completely transformed China's economic incentive system, thus building the foundation for the country's amazing economic development during the last 30 years.

When Deng finally emerged at the top of China's political hierarchy in 1978 (at the age of 74), he started with lots of energy to turn the existing system upside down. While under Mao political loyalty was the main criteria determining the promotion of officials, Deng fought for the selection of officials based on merit and skill, for the re-introduction of material incentives, and for greater experimentation in economic policy. Deng's hallmark was a focus on economic opening, on learning from abroad, combined with a pragmatic attitude towards problem solving.

A couple of Chinese economists have written some nice empirical papers that illustrate the new incentive system put into place by Deng.

While Hongbin Li and Li-An Zhou (2005) show that the likelihood of promotion of provincial leaders in China increases with their economic performance, Yang Yao and Muyang Zhang (2012) find that more capable city leaders are more likely to be promoted. In another paper, Hongbin Li, Pak Wai Liu, Junsen Zhang and Ning Ma (2007) - using an original research-design with a sample of Chinese twins - argue that the way the Chinese Communist Party is choosing its members makes sure that party members have above-average abilities.


A comprehensive review of the literature on China's new incentive system is provided by Xu (2011), and three good books examining appointment patterns of Chinese officials over time are Bo (2002), Landry (2008) and Pieke (2009). 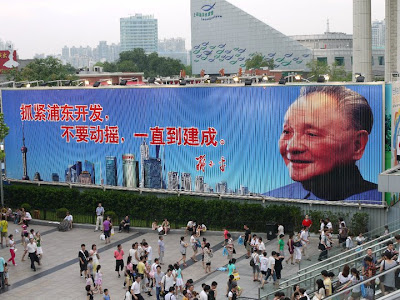 Posted by Michael Rochlitz at 06:26