The economist who inspired me to start a PhD was Mushtaq Khan, professor of economics at the School of Oriental and African Studies (SOAS) in London, where I studied for an MSc in development economics a couple of years ago.

SOAS has a couple of inspiring economists, and Mushtaq is one of the best. After each lecture, we went home enthusiastically discussing new ideas.

It was the big questions we were discussing. How, as a policy maker and economist, can you help a poor country to grow?  Why are some countries so much more successful in promoting growth than others? Why did catch-up work in South Korea, but much less in India, and not at all in so many African countries?

Apparently, the policies advocated by the big international institutions were not really the solution. I still remember a couple of graphs from Mushtaq's lectures:

What these graphs show is that different indicators for good governance such as secure property rights, rule of law and low corruption are not preconditions but outcomes of successful economic development.

Of course they would probably grow even faster if they had also good institutions, but putting into place decent institutions before reaching a certain level of prosperity is almost impossible in many poor countries. So finding this something else becomes the crucial question. 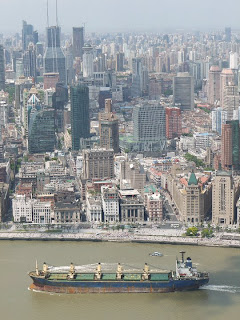 China is a good place to start searching. The country still has huge problems with corruption, insecure property rights and poor rule of law, but has been growing at almost 10% for the last 30 years. There seem to be a couple of key conditions in place that keep growth going.

One key condition are the incentives faced by Chinese government officials. The overarching incentive they face is to assure high growth rates. Although many are apparently still happily taking bribes, they would never ask for sums that could cause the failure of a business project, as a successful growth record is the decisive criteria determining a possible promotion. Now, how to put such pro-growth incentives into place is the real question.

Here the man who led China out of its Mao era troubles, Deng Xiaoping, played a key role - see a later post on this, with a couple of links to nice quantitative papers on China's incentive system.

If you are interested more in detail in Mushtaq Khan's research, one of his lectures is available on youtube:

Posted by Michael Rochlitz at 21:19